If you have just pulled a huge harvest of turmeric out of the garden like we have, and are wondering what on Earth to do with it all?

It’s time to fire up the freeze dryer!

Freeze drying is considered the best method for drying turmeric, compared to hot-air drying and sun drying, as it results in the least changes to the rhizomes microstructure and the least nutrient degradation. You also have the added benefit of the superior shelf-life of freeze-dried foods (up to 25 years).

We recently harvested, processed and freeze dried over 100 pounds (45 kg) of fresh turmeric!

Read on to discover the process we used, mistakes we made and what the finished product looks like!

How to Freeze Dry Turmeric

We had a bumper harvest of turmeric this year, and although we use it raw in cooking, golden lattes and our home-made dog food, there is no way we were going to eat 100 lbs of fresh turmeric!

Another way we have used turmeric, long before we ever started growing it, is as a freeze-dried powder. We have added this to our daily smoothie for years to take advantage of the many health benefits attributed to turmerics antioxidant and anti-inflammatory properties.1

And now we can make our own freeze-dried turmeric powder!

Here are the steps we followed in order to freeze dry 100 lbs of turmeric.

If you don’t grow your own turmeric and want to follow this method, you can do so with store bought turmeric. (As a side note, turmeric is super easy to grow so if you have favorable growing conditions, I recommend you start growing some today!)

After harvesting our turmeric, we gave each piece a thorough wash, breaking it up as necessary to get the dirt out of every crevice. We let the clean turmeric dry out in the sun for a few days before bringing it inside until we were ready to begin processing it for freeze drying.

The first batch of turmeric we processed was the largest – about 45 lbs!

For this batch, we used our Breville Kitchen Wizz with the course shred attachment. This worked well to get the turmeric into reasonably uniform pieces, it also made a huge mess of the Kitchen Wizz!

In subsequent batches, we switched to simply mincing the turmeric with the S-blade. This was faster and also resulted in a much easier clean-up and, as such, this is the method I would recommend.

We have a medium Harvest Right freeze dryer and added about 2.75 lbs (1.25 kg) of turmeric to each tray. This means we were processing about 11 lbs (5 kg) of turmeric per cycle. We always pre-freeze our foods before freeze drying, so once full, the trays went straight into the deep freeze.

Because we only had 2 sets of trays, and we had processed such a large amount of turmeric in one session, we had to get creative with our storage ideas. Luckily we had on hand a vacuum sealing bag roll which is the perfect width for the freeze dryer trays. We cut these to the right length and froze the excess turmeric in the resulting bags.

Once frozen, the turmeric slides quite easily out of these bags and onto the trays in one large chunk. The bags were re-used for subsequent cycles – although the bags did get shorter each time!

If you have a Harvest Right freezer dryer, you will know that the machine does most of the work for you in this step! Whack it in, turn it on and away it goes!

We ran a normal cycle and most of the loads ran for approximately 44 hours. We could have possibly done with less extra dry time, however this enabled us to package up the turmeric every other morning – provided we immediately defrosted the freeze dryer and commenced the next cycle.

It also ensured there were no sneaky ice deposits that might ruin our finished product!

The final step was to package the turmeric as soon as it came out of the freeze dryer. The majority of the turmeric was powdered using a Vitamix and then packaged into small Harvest Right Mylar bags (8”x12”) with a 300cc oxygen absorber.

It powdered very easily because freeze-dried turmeric is extremely light and easily crumbles between your fingers. In the past we have dehydrated turmeric and by comparison, powdering that was like running the Vitamix full of gravel!

We added 10% organic black pepper powder (which was also freeze-dried and powdered) to most of the bags of powdered turmeric.

Not all of the turmeric was powdered. We also kept some of the shredded and minced turmeric unpowdered to use in cooking whenever fresh turmeric is called for.

This entire process was then completed many more times!

This means the turmeric lost about 80% of its weight in water!

The result was a light, fluffy product that was also very brittle and therefore easily crumbled by hand or powdered using the Vitamix.

The turmeric processed using the course shred blade held together until crumbled, the minced turmeric (using the S-blade), did not.

The water extracted during the freeze drying process (and collected in the bucket when the machine was defrosted) was a particularly milky white color.

It also had a slightly oily, pale yellow layer that settled on top once the defrosted water had been sitting for a while.

A similar slightly oily residue coated the walls of the freeze dryer once the cycle was completed. This also had quite a strong (not unpleasant) odor, similar to the turmeric itself. After each turmeric cycle, the inside of the freeze dryer was wiped over with a damp cloth.

The turmeric cycles were followed by a load of our home grown fruit (banana, guava, strawberry and pineapple) and the residual odor did not affect the flavor of subsequent loads and eventually faded completely.

Prepare for everything you use during the process to be stained! We have developed the habit of using a plastic table cloth on the kitchen bench whenever processing large quantities of turmeric which certainly helps reduce the mess.

The Kitchen Wizz, Vitamix and even the Harvest Right trays all have some residual staining to this day, despite being used since to process other foods (it hasn’t impacted the flavor of those foods).

Finally, if you don’t wear gloves, expect to have orange hands for several days!

Can you freeze dry turmeric?

Not only can you freeze dry turmeric, it is the superior drying method compared to sun drying and hot-air drying as it results in the least nutrient loss and microstructure changes.4

Are nutrients lost when turmeric is freeze dried?

Although freeze drying is considered the best method for drying turmeric, there is still nutrient loss compared to fresh turmeric. One study showed that fresh turmeric has greater antioxidant activity and higher amounts of compounds such as curcuminoids, phenolic acids, flavonoids and amino acids.4 The old adage ‘fresh is best’ holds true for turmeric!

Why is black pepper often added to turmeric powder?

How long does freeze-dried turmeric last?

Many sources, including Harvest Right and Mercer Foods (both specialists in freeze drying), claim that freeze-dried foods can last up to 25 years when correctly stored. Dried turmeric, such as that you can buy in the grocery store, is typically expected to last 2-3 years. Given these advertised shelf life estimations, I would expect my freeze-dried turmeric to last closer to 25 years than 3 years, packaged as it is in a Mylar bag with an oxygen absorber.

Spice Up Your Freeze Drying with Turmeric!

As you can imagine, after freeze drying over 100 lbs of turmeric, we were relieved to bag up the final load and call it done!

Having said that, we will still repeat the process next year because we love growing and using turmeric. Lessons learned this year will make the process faster next time around (mince, don’t shred!) and our efforts are rewarded by the mounds of golden powder we now have in storage.

There is something special about being involved in every aspect of your food production – planting, caring for, and harvesting the produce, then preserving, and finally cooking and consuming.

Have you got turmeric growing in your garden? We would love to hear about how you typically preserve your harvest and if you do decided to give freeze drying turmeric a go, let us know what you think!

What is Freeze Dried Food? A Nutritionist Explains

What Are The Best Treats To Freeze Dry?

Freeze Dryer vs Dehydrator: What Sets Them Apart 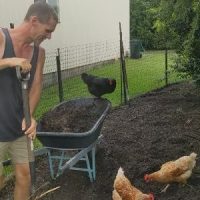 I am a passionate gardener and outdoor enthusiast who has been working on building food security through gardening since 2017. My 6 acre homestead encompasses well over 100 different fruit and nut trees. I also keep an extensive vegetable garden that keeps the freeze dryer and dehydrator running almost constantly. When not in the garden or the kitchen preserving the harvest, you will find me hanging out with my German Shepherd.