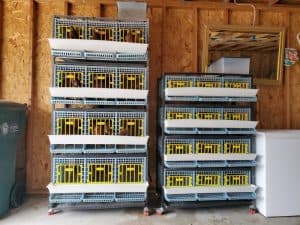 If you are like me all of this Covid-19 pandemic stuff motivated you to do the emergency preparation that you had been putting off. I had been looking at Hatching Time Cages for a long time, but just had not ordered them yet. Since I had been planning to buy them, the extra motivation just hurried me a long a bit.

What appealed to me about the quail and partridge cages at Hatching Time, is that they make stackable cages that allow you to raise your own meat right out of your garage. They are very hygienic and designed to raise the birds with minimal mess. The large food trays and an automatic watering system also save a lot of time.

In this article I am going to go over what it is like to have and use these cages now that I have had them for a while. And I will give specific examples based on my actual experiences in using the cages.

Before I get into all of the details about these cages first I want to let you see them in actual use. This will give you a “bird’s eye” view (pun intended) of what using these cages are like in a normal home or garage. In the below video I show you the cages with some Rhode Island Red chicks that I was raising when I first got my cages. Please watch this video first before you read the rest of this review.

One thing I would like to point out that I failed to mention in the video is that the automatic watering system does lower down for when the chicks are small. Even though I had read that in the instructions during assembly, I had forgotten about that when making this video.

And here is my update video of how I like them, and what I would do differently, after owning them for 5 months.

I will talk about both the positives and negatives I have found in their system. The only negatives I have found have to do with some damage on some parts during shipping, and some minor assembly challenges. I will save the couple of negative things for the end and start with the majority which is so positive. So let’s get going! 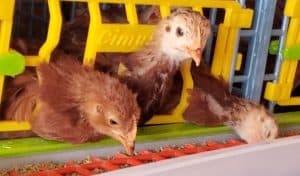 The thing I noticed about putting birds in the cages for the first time was it was very easy for them to figure everything out. I didn’t have to tap on their food with my finger, they just naturally figured out how to stick their head through the door and eat.

There also is really no way for them to poop in their food, which I also really like. Hatching Time calls their cages the most hygienic way to raise birds. And their system really is hygienic. I really like it.

Not only is the Hatching Time system hygienic for the birds (and saves on food costs), but it makes keeping birds very clean for the bird keeper. One of my big worries was them spilling food around the cages and attracting pests. They do spill a tiny bit; very slight. And so it is a simple to quickly sweep up every couple of days.

A huge benefit to this system is it is the most odor free way of keeping birds I have ever seen. Birds are constantly pooping. And instead of having their betting soak up the poop and stink, the poop lands on a tray and dries out. And because they are so simple to clean, you really could clean them every day if you wanted to. I clean them off every couple of days and even my wife commented on how odor free this system was. 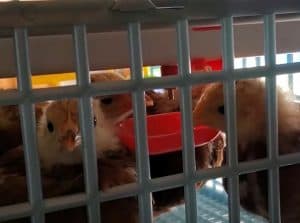 Also, as you hopefully saw in my above video, getting them to drink out of the automatic water dispenser was pretty simple as well. I just pushed on the water nozzle with my finger and filled up the drop catch cups. The birds would see me filling the cups up with water and they immediately came over and drank from it.

I only filled each catch cup up with water twice and by then the birds noticed that when their heads bumped against the water nozzle water came out. Then they all started drinking directly from the nozzle.

The other thing I really like about the watering system is the several gallon container that fits on top of the stack of cages. I just bring a step ladder over and dump in my two gallon bucket full of water every few days. It makes watering an easy thing you don’t have to do every day; love it.

I have my cages in a detached garage without heating. And it gets bitter cold here in the winter. So I will most likely have to put watering containers in each cage in the winter. I am not sure how that will work exactly. Or I may put a space heater in the garage just to keep it above freezing. 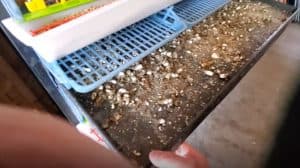 If you have ever shoveled horse manure from a horse stall, picked up dog poop from your yard, or even cleaned out the soiled bedding from a chick brooder, you will appreciate the ease in having a simple manure tray that you quickly dump or hose off every few days.

I have noticed every once in a while the birds will poop and miss the poop tray, and the poop ends up on the floor. But this is rare. For me it has happened 3 or 4 times in about 2 months (I am thinking that they have to try pretty hard to miss lol). But a single pile every few weeks is a simple clean up when almost all of the manure lands neatly on the tray that is so simple to pull out and clean. I love how clean and sanitary this whole Hatching Time system is. 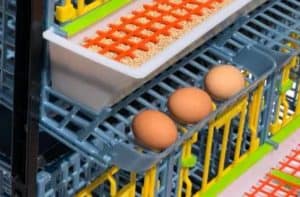 Now this is a feature I am yet to be able to try out for myself. That is why this image is one I got off of the Hatching Time website. But this is a very important feature and one that was a big part of my decision to buy these cages.

In normal chicken type nesting boxes or quail cages the hens sometimes poop on the eggs. If you are keeping the eggs to eat you can wash them off and stick them in the fridge. But if you are wanting the eggs to hatch you cannot put soiled eggs in the incubator.

The Hatching Time cages system has floors at a slight incline. Enough that the eggs just naturally roll out, but not enough to crack any of the eggs. So when the hen lays the egg it rolls out before she has a chance to soil it. Pretty snazzy. 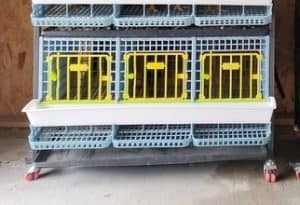 Another very well thought out design feature is having the stacking cages on wheels. Two of the wheels have locking breaks in case your surface is slightly sloping.

Having the cages on wheels makes it very easy to move the cages around if and when you need to. For example about every other day I will pull the cages out and quickly sweep up the few grains of food that do fall out of the feed trays. It makes it very quick and painless to keep everything clean.

Also as I was doing some spring cleaning in my garage this spring, I decided to change the side of the garage that I kept the cages on. This took all of about 45 seconds to simply roll the cages to the new spot I decided to keep them at; very handy. 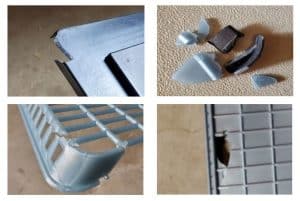 Hatching time warned me twice when I ordered on the phone that if anything was damaged, to call them and they would send me replacements. And when I opened the boxes once they arrived, it was very clear why. There was literally no padding between the wall of the box, and the contents inside.

I mean if the UPS guys are not super careful all the way along in handling these boxes, parts are going to be broken. Frankly, I was surprised I did not have more damaged parts than I had. So it is very likely when you get your order you may have damaged parts.

However the customer service department at Hatching Time was very good about shipping me out the parts that were broken. They did not question me at all. They just asked me for pictures and shipped me out what was broken. That part was very simple. And when they shipped out the replacement parts, they were packaged and protected much better than the original shipment. 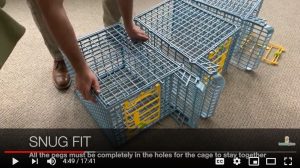 Let me start first by saying that overall the assembly of these cages was easy. And the instruction on the website along with the assembly videos were very well done and well put together. They made assembly so much easier.

However the assembly of my unit did not go as smoothly as it did in Hatching Time’s assembly videos (and I am a pretty handy guy). But then are things ever as easy as they look in assembly videos? Still overall they were relatively simple and easy to put together.

So hopefully my giving you a heads up as to the challenges I ran into, will make it all go easier for you.

In putting these cages together I had 4 basic challenges the instructions and videos did not prepare me for. They were:

All in all I could not recommend these cages any higher. The designer of these cages have really thought of everything. These cages remove the typical problems you have in keeping birds, making such a simple and hygienic system for the animals as well as their keepers. I really like them a lot.

And what is most impressive to me is that it gives urban families the ability to cleanly produce their own meat for their family; to scale. It gives you the ability to produce more than most families need so that you can store meat (by freezing, canning or freeze drying) for the future.