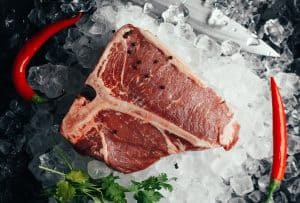 Knowing how to store meat without a refrigerator can do more than save you from losing food if the power goes out. It’s also a great way to take ownership of the ingredients that go into your food, and with a little bit of trial and error, can produce some really delicious results.

With massive, long-term power outages coming more and more frequently these days, knowing how to apply even one of these techniques could alleviate the stress of your next emergency. In this article we will go over each of these methods in more detail and give you simple practical tips that will help you decide which methods you want to begin using. Let’s get going!.

The first is to remove the moisture bacteria need to survive by simply drying your meat. The second way is by changing the pH of the meat with an acid like vinegar or salt, which will make the meat uninhabitable to bacteria. The third method involves creating a physical separation from the meat to the air; like storing meat in a sterilized jar.

Dehydrating meat makes it safe for consumption by eliminating the moist surface which bacteria like to grow on, and as an added bonus, can be super tasty.

Dehydrating can be done in a number of ways. You can purchase solar or electric dehydrators, or it can be done in an oven at low temperature (around 165 degrees Fahrenheit) with the door open.

You could also dry your meat outdoors. Just remember that food left outdoors can attract both pests and predators, so you’d want to keep a close eye on it if you chose this method.

When dehydrating meat make sure to slice it thinly, generally no more than ¼ of an inch. You can ask your local butcher to slice it for you to save time. Use cuts of meat that are extremely lean. The fat in meat won’t dry out and can then spoil if you don’t refrigerate the jerky afterwards. If you’re using a store-bought dehydrator you’ll generally want to dry your meat for between 16-20 hours, depending on how chewy you want your jerky. As an extra safety measure, you can roast your meat at 250 degrees Fahrenheit for about 15 minutes before or after you begin the drying process.

I recommend marinating your meat before you dehydrate it; you’ll give it a better flavor. I use a simple combination of barbecue sauce and red pepper flakes, and let the meat marinate overnight.

Dehydrated meat can be stored for up to about 2 months, but longer if you’re able to keep it cool.

Freeze drying is essentially another method of dehydration. You’ll need a freeze dryer, which are expensive, but the finished product will be lightweight (because you’ll have removed all the moisture) and is a great option for backpacking meals.

Freeze drying also retains the nutrition of your meat, and since it doesn’t use salt, may be a healthier option for those who need to watch their salt intake.

Freeze dryers work by lowering the temperature to as low as 50 degrees below Fahrenheit, which creates a vacuum around the meat. Next, the temperature is raised slightly, which causes the moisture in the meat to evaporate. 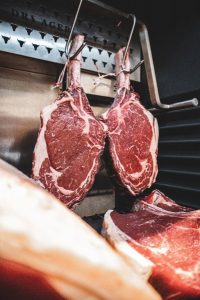 Smoking meat is another tried and true way to preserve meat and can also turn out a really flavorful product and all types of meat (including fish) can be smoked.

Like dehydrating, smoking meat can be done with a commercially made or homemade smoker. Smokers work by slowly burning water-soaked wood chips in a closed container with racks and a hole for ventilation.

The flavor of meat comes from the type of wood you use to burn. For example, hickory smoked products come from burning hickory tree wood chips.

One word of caution about smoking meat—smoke contains carcinogens, or cancer-causing agents—so be mindful of how many smoked products you consume. If you are concerned or want more information, contact your doctor.

Curing meat can be a time-consuming process, but it is fairly cost-effective and easy to do. Curing meat uses salt, which dehydrates the meat (remember that’s a good thing for discouraging bacteria) and also changes the chemistry of the meat in a way bacteria don’t like.

To cure meat, you’ll want to remove all the fat you can. Then you’ll rub salt on the meat and refrigerate it for at least a week. If you want to add additional flavor, go ahead and throw in some spices. Once the meat has cured for about a week, rinse off the salt and wrap the meat tightly in a cheesecloth.

Store the meat in a cool, dry place and it should last 2-3 months.

This video has a ton of great information on curing meat.

Brining is like curing except you’re adding water and sugar to the mixture which preserves the meat. I know I’ve said we want to remove water from our meat to help keep it from spoiling, but in this instance, with the high concentration of salt, the water in the brine just helps keep the meat tender.

Brining is usually done in a large crock or a jar. There is a huge variety of recipes for brines on the web. A very simple one would be 3 quarts of water, 1 pound of pickling salt (remember I said it was a ton of salt!), and ½ cup of brown sugar. Place the pieces of meat in a sterilized jar with the brining liquid. Make sure all the meat is completely covered by the liquid, and store for a week at 36 degrees Fahrenheit.

After your meat is done brining you may still need to keep an eye on the temperature and store in a cool place. 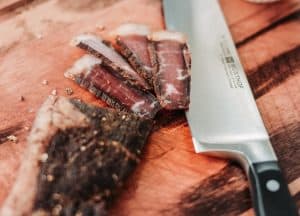 Biltong is the South African version of cured meat. The meat is marinated in vinegar and flavored with salt, brown sugar, cloves, coriander, black peppercorns, or almost anything else you want to throw on there. The meat is then left to dry for a few days or up to a week, depending on how thick your pieces are.

In this technique the acid in the vinegar does the work of “cooking” the meat, and there are ways to create DIY “biltong boxes.” This technique is nice because you’ll be able to preserve bigger pieces of meat than if you were trying to dehydrate it all.

Canning meat to keep it from spoiling involves sterilizing the meat inside a jar by heating the jar up inside a hot container (the canner). The process of heating up the jar also seals the lid to the jar, which is why you often have to get a butter knife to pop off the lid from an item canned at home.

Pressure canners are fairly affordable, and the shelf-life for these items is on the longer side; 2-3 years or potentially longer if the seal on the lid remains unbroken. Pressure canners, by nature of the fact that they are creating a high level of pressure, can be dangerous if all that pressure gets released unexpectedly (think explosion). So be sure to read all your owner manuals thoroughly.

It is possible to can both raw and cooked meat. With cooked meat, you’ll can it in a bath of its own broth, so your product will likely be something akin to stew meat.

Storing meat in lard is another way of creating a physical barrier against the invasion of bacteria. For this technique you’ll want to layer the meat in a jar or a crock with melted lard.

This technique can be done with raw meat and this could be a viable option for those who process their own livestock and have tons of lard on hand.

Pemmican falls into its own category of meat storage because with this technique you’re actually making a new food item. Pemmican is a solid block of dried meat power mixed with fat, spices, berries, and sometimes honey. It was originally created by North American Indians and later adopted by others. I’ve seen the flavor described as a fattier beef jerky.

Pemmican is often found on survival or backpacking blogs because it is an awesome, portable and shelf-stable product. If you add a little salt to your recipe you can also add a dash of electrolytes.

The mixture can be packed into silicone molds while the fat is still soft and after it solidifies, can be popped out and stored at room temperature for 1-5 years. 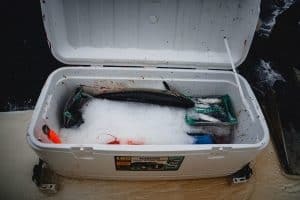 Last but not least I’d be remiss to exclude the most logical first step you might want to take in an emergency, which would be to simply find another suitably cold place for your meat. Refrigeration prevents bacteria from getting to your food by lowering the temperature to a level where bacteria don’t like to live.

If you live in a colder climate when your power goes out and it is below freezing outside, you may be able to store your items there, preferably in a cooler.

There are a number of really well insulated coolers on the market that can keep your food—yes even meat—cool for a week if properly packed with ice. I’ve tried them and they really are great.

If you don’t have the money to spend on a cooler like this, you can modify your existing cooler with a few DIY steps. I personally have modified a cheap cooler with some extra insulation and it really helps keep my items cooler on long drives back from the grocery store.